The Meaning of Yoga 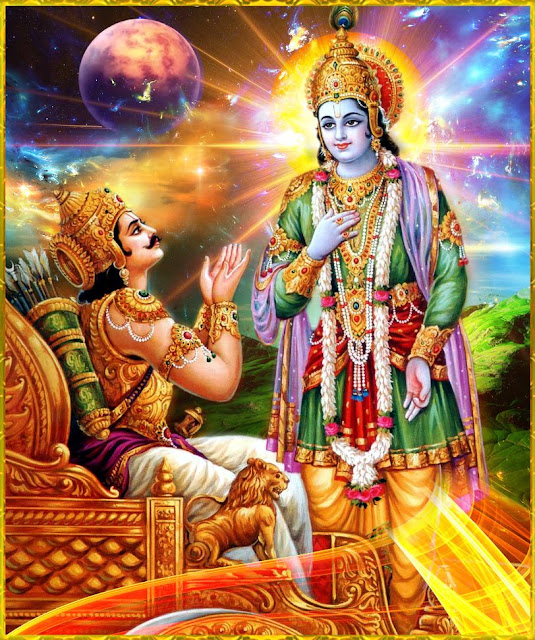 Introduction to the Third Chapter of the Gita

You may have noticed that my comments on the Bhagavad-Gita follow a particular point of view. I believe that this great text can only be approached through the great teachers that have studied it. Of these great teachers the commentaries that best suit the text avoid distorting its thesis.

The thesis of the Bhagavad-gita, in fact, is quite clear. For example, Yamun Acharya in the 11th Century  summarizes the main idea of the Gita as follows in a book called the Gita-samgraha :
“It is the doctrine expounded by the Bhagavad-gita that Narayana who is the Supreme Brahman, can only be achieved by means of bhakti which is brought about by observance of the dharma, acquisition of knowledge, and the renunciation of passion.”
There are many who are uncomfortable with such a clear interpretation. They try to make the Bhagavad-Gita into a more mysterious book filled with secrets. But the real knowledge imparted by the Gita is an open secret. It expounds dedication to God. God is identified as Krishna throughout. For example, at the end of the Second Chapter, Kṛṣṇa tells Arjuna, tāni sarvāṇi saṁyamya yukta āsīta mat-paraḥ vaśe hi yasyendriyāṇi tasya prajña pratiṣṭhitā “One who restrains his senses and fixes his mind on Me is of steady intelligence.” The word “mat” here means Me. If one is searching for a “nonsectarian” interpretation of the Gita one may say that “Me” has a different meaning. Since I say “Me” when talking about myself and you say “Me” when talking about yourself, we are all “Me.” “Me” means the “Oneness” of “Me.” In the end there is no distinction between you and me and we are all together. But this interpretation flies in the face of reality. The Bhagavad-Gita may lend itself to a certain amount of interpretation, but the idea that “you” and “me” are the same as the infinite Me of divinity is neither good common sense, nor is it grammatical. The idea that we are “One” with divinity is unsupported by a close reading of the text.

Yamuna’s summary, the Gita-samgraha is very useful in getting at the real meaning of the text.  According to Yamuna’s version, the first six chapters of the Bhagavad-gita really instruct us on gaining a well-founded position in understanding ethics and wisdom. These are called the way karma or “action” and jnana, or “spiritual knowledge.” In the first third of the Gita, Kṛṣṇa teaches how action should be dedicated with knowledge in yoga to achieve a harmonized relationship between soul and Supreme Soul. Wisdom, or a proper understanding of the soul or atma helps us to balance our karma. Proper dharma or religion means living in harmony with our true spiritual condition--religion means proper balance of the need to keep body and soul together and dedication to God. The implications of that dedication or bhakti will be explained later.
As we have seen, the first chapter of the Gita is largely introductory material, coming as it does halfway through the great epic Mahābharata. In the middle of the Kurukṣetra war, as the opposing armies stand ready for battle, Arjuna is overcome, and expresses his inability to perform his duty as warrior. We see the moral dilemma on which the conversation turns.
In the second chapter of the Gita, Arjuna accepts Krishna as his guru or  teacher and asks advice in his moment of doubt. Here the real teachings of the Bhagavad-Gita begin to unfold.  The teaching of Kṛṣṇa is for the sake of Arjuna, who, overcome by misplaced attachment, compassion has taken refuge of Kṛṣṇa.

The second chapter of Bhagavad-gita, as we have seen, explains the nature of the soul or atma. This analysis of the soul or atma is called “sankhya” which means something like analysis or “breaking it down.” Krishna analyses the soul’s nature in relationship to the world of space and time where everything is temporary. Krishna explains that a “sankhya” analysis is helpful in understanding our true position--that the soul is eternal.  This is his first teaching, for this wisdom will guide us in many decisions.

Michael Dolan, Mahayogi
Michael Dolan/Mahayogi is a writer, teacher, blogger and world traveler. In the last 5 years he’s traveled around the world five times, from Mexico to Canada to Russia, Thailand, and China working on screenplays, directing short films, and lecturing on the wisdom teachings of ancient cultures and civilizations. During the 1980s at Guardian of Devotion Press in San Jose, California he was responsible for publishing a number of works on yoga and philosophy, notably The Search for Shri Krishna, Subjective Evolution, and the Loving Search for the Lost Servant, among them. These books teach about inner life. Michael Dolan/Mahayogi now lives and works in San Miguel de Allende where he teaches at the Universidad de Guanajuato, one of Mexico’s most prestigious universities.