I'd like to dedicate this post to the memory of my old friend Yudhamanyu Prabhu, who passed away on Shiva-ratri. I know he's there waiting for us all in the big kirtan. 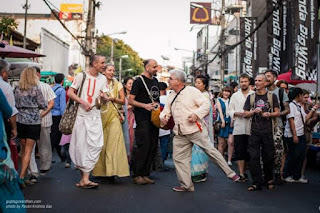 On this blog I've tried to do a bit of a study guide to the Bhagavad-Gita, which I posted here:

When I re-read what I had written, I realized that the summary of the second chapter was too short.

The thing is, I have read through the second chapter so often that it seems familiar to me. I feel like everyone already knows this, so I spent more time on other chapters. But some friends asked me to continue writing about the second chapter of the Bhagavad-Gita, so I decided to have another go.  I left the Sanskrit in footnotes to make it easier to read.